Crohn’s disease is best described as an inflammatory condition of the gastrointestinal (GI) tract causing pain and diarrhea. Without treatment, it can develop into blockages, fistulas (small tunnels through tissue) and scar tissue.
Crohn’s disease typically affects the end of the small bowel and the beginning of the colon. However, it may affect any part of the GI tract from the mouth to the anus and can affect the superficial and deep layers of the intestinal wall. It is most commonly diagnosed in people ages 20 to 30, and those with a family history of inflammatory bowel disease have a 20% higher chance of developing it.

Equal numbers of men and women appear to develop the disease and having a first degree relative with the disease may make it ten to fifteen times more likely to develop it, even though it is not considered an “inherited” disease in the traditional sense. 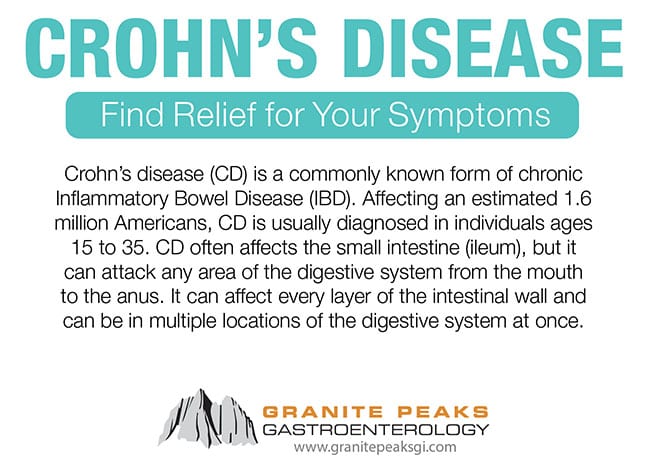 Smokers with Crohn’s disease tend to develop more severe issues with the disease, putting them at increased risk for requiring surgery.

Although there have been many studies about Crohn’s disease, its exact cause remains unknown. Many scientists think that it may be caused by a combination of various risk factors, including:

What Should You Expect if You Have Crohn’s Disease?

Symptoms of Crohn’s disease may range from mild to severe. They may develop gradually or appear without warning. Apart from the physical symptoms, which include persistent diarrhea, abdominal pain and anemia, Crohn’s disease may affect your mood and diet, too.

Make an Appointment with Us

Our treatment plan for Crohn’s disease in our Sandy and Lehi offices includes medication and nutritional changes. This helps reduce or alleviate symptoms, improve mood and promote natural healing.

Take note, however, that there is no standard treatment for Crohn’s. Our care plan remains flexible and dependent on the symptoms you’re experiencing.

Give us a call today to schedule a consultation. Let’s customize a treatment plan for you.